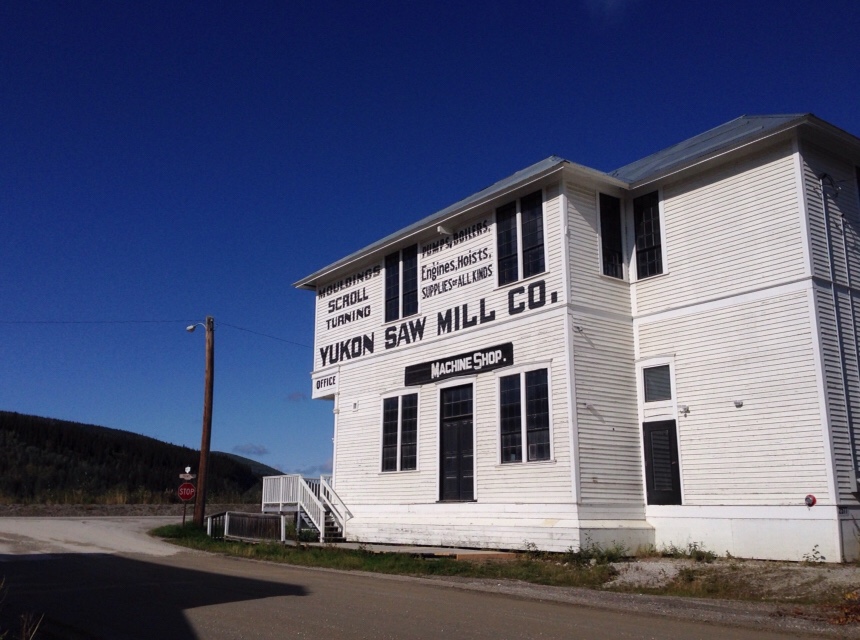 We’ve been back in Dawson City for just over a week, and I’ll tell ya, it feels good.

This morning as I was walking Samson on the trail beside the highway, his inspection of a clump of grass was interrupted by the sound of an ATV approaching from behind. We stepped to the side as a child rode past. Miniature vehicle, tiny helmet, pink Disney princess backpack bouncing between her shoulder blades. Because someone has taught her good off-road manners, she slowed as she passed. Two eyes on the road, two hands on the handlebars, focussed and full of the responsibility she’d been given.

Dawson City is a place where elementary school kids can drive their own selves to town.

Dawson City is also a place where the young men who serve you in the restaurant are as likely to wear skinny pants and man-buns as not. They’re in Dawson for the summer, earning their university money or else some extra credit in the school of life experience. One or two have beads and strips of leather braided into their long beards.

The other young men you’ll see are wearing ball caps and driving big trucks, loaders, and backhoes. Or flying helicopters or bush planes, or driving flat-bottomed boats into town from Moosehide or West Dawson.

Well, so are the old men, for that matter.

They all gather together in the bars after hours to slouch in their chairs, fingers tapping the tops of beer bottles, laughing out of wide mouths and red faces, legs spread, the fronts of their bodies concave because they’re sitting in the shape of the letter C.

The dance teacher in me wants to tell them to sit up straight.

When you look at these young men, you understand how the old men got that way.

Dawson City is a place where a beer costs only six bucks on tap, but a pound of butter costs eight. And a pound of bacon? Thirteen-fifty.

Hey there, Dawson City. It’s good to be back. I missed you.

2 Replies to “Back in Dawson City”

I'd love to hear your thoughts! Cancel reply

The year I turned 40 a friend did a spread for me.

Good morning! In my world, Sundays are for goofing

Do you ever need to take a break from your writing

Sometimes when I'm not able to disappear with my l