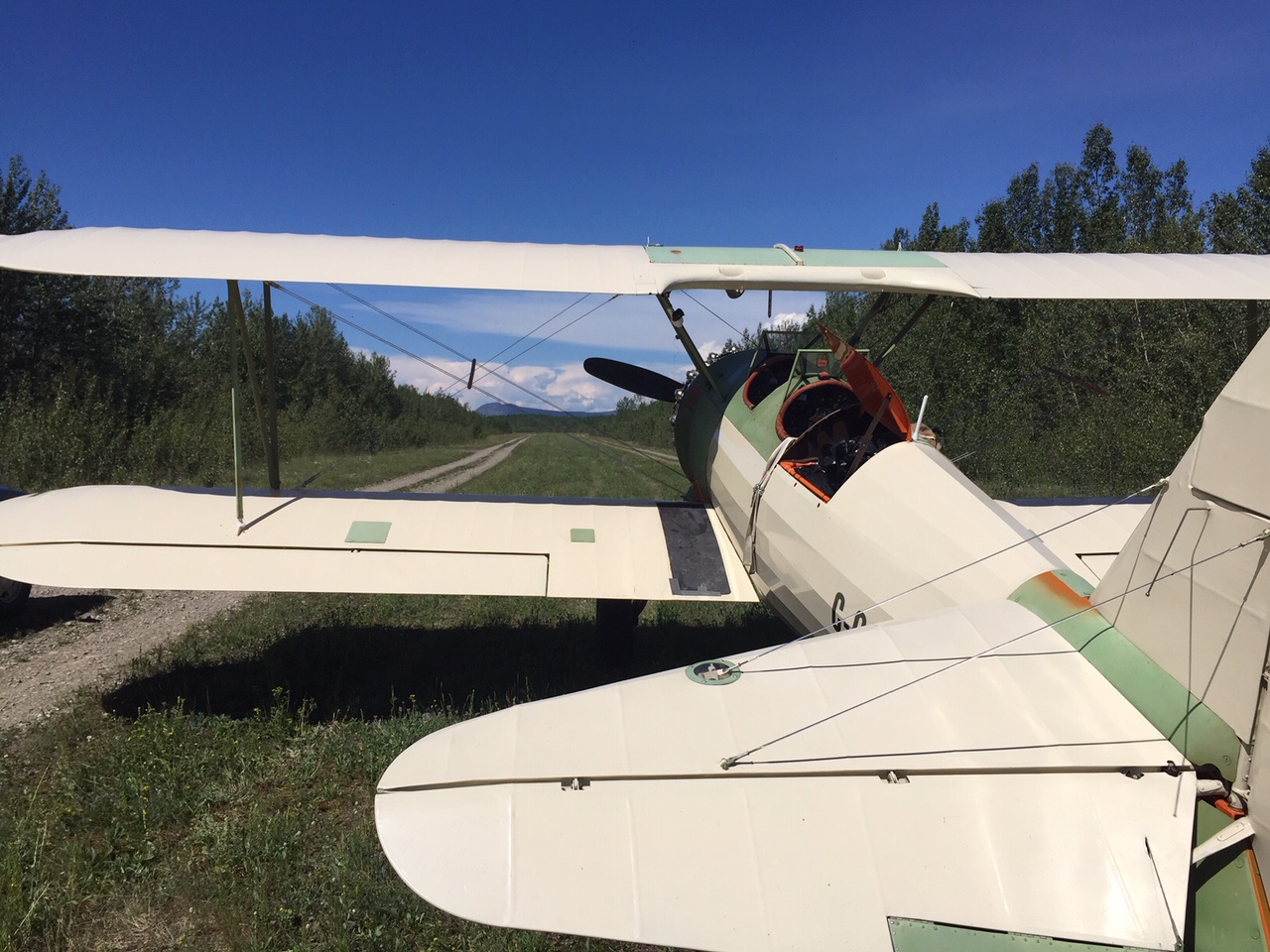 I believe I have not yet told you what brought Kelly and I to Dawson City last summer…and what brought us back again this year.

This is it – a vintage Stearman biplane. She’s a beauty, eh? Kelly was hired to ferry her from Ontario to Dawson last summer.

It was a long trip because the airplane has a very short range.

Also, the it’s an endurance test for the pilot. The trip was done in 33 legs, 44 hours flying in total. He averaged two legs per day, if that helps put it into perspective.

A ground crew followed along below, with extra avgas in the back. She does like to guzzle the gasoline.

This particular craft was manufactured in 1942 as a WWII trainer.

She was given a paint job over the winter. Now she shines in the Great River Air colours of blue and cream.

At long last, Kelly has landed his dream summer job…giving rides in a vintage biplane in the skies over Dawson City.

I’ve turned my chair to look North, where a thunderstorm is slowly working its way down the lake. I sat knitting for an hour or so while Kelly napped in the cabin and listened to thunder rumbling in the distance, wind in the trees, the snick of my knitting needles, the pair of baby ravens learning how to talk as they danced in the sky around their mother.

We have been in the Yukon about five weeks now, ensconced in our cabin at Fox Lake, totally off the grid and being quite antisocial, to tell you the truth.
But I shouldn’t say we. I spent more than three weeks of that time here completely on my own while Kelly was away having an adventure of his own.

He was hired to ferry this beautiful vintage airplane to the Yukon from Sault Ste Marie, Ontario. I’ll tell you more about that in the next letter, I promise.
As consolation for not being allowed to go, too, the day he left, I stopped into The Itsy Bitsy Yarn Shop  (yes, that is really their name) in downtown Whitehorse and treated myself to enough wool to knit myself a sweater in Heritage, from the Briggs & Little Wool Mill in Harvey, New Brunswick. The colour is called Fawn.

The pattern is called Mandolin from the latest issue (Fall 2018) of Knitty Magazine.
It’s coming along well, considering the only thing I really know how to knit is socks. In fact, it’s coming along so fast, I might just have to go buy more yarn and make it a two-sweater summer!
What are you working on this summer?

…a thick layer of frosting on an already rich and delicious cake.

Congratulations to my wonderful husband on being awarded the Order of Polaris and inducted into the Yukon Transportation Hall of Fame!

By Max Leighton, What’s Up Yukon
Photo by Michael Collins

This month he was given the Order of Polaris, one of the Yukon Government’s top honours, awarded to Yukon aviators (and the odd Outsider) for service to the territory, its people and its unique culture.

Collins, who is retiring this year, has spent 27-years training more than 300 pilots from various schools in Whitehorse as well as satellite programs in Atlin, Ross River, Faro and Dawson City.

Until recently he had trained the majority of all private and commercial fixed wing pilots in the territory.

He’s taught everyone from the young to the retired the secrets of flight.

“It’s a pretty wide spectrum,” he says. “For some people it’s just a personal challenge, it’s a goal that’s not that easy to do. A lot of our students are folks who have always had a dream to fly.”

Collins is known for his hands-on approach to training, sitting fearlessly alongside would-be pilots attempting everything from basic aircraft control to emergency maneuvers, falls, spins, takeoffs and landings.

“I call it ‘knowledge through a fire hose,’” he says. “It comes fast and furious… and it’s hands-on from day one.”

After a while the training becomes reflexive — and marginally less terrifying.

“The better you get at the machinery, the farther out your awareness goes from all around you, to in the aircraft and outside,” he says.

Collins doesn’t just teach his students to fly, he teaches them to think like pilots.

“Learning how to fly is one thing — learning when to fly and when not to fly and what not to do and how to stay out of trouble, that all comes under the heading of pilot decision making and that’s probably the big variable in keeping people safe,” he says.

Getting a pilot’s license is hard work, and it’s not cheap —about $9,500 for a recreational pilot, $14,000 for a private license — but it’s probably more likely to lead to a job than your undergrad degree, and you’re guaranteed a good office view.

Sixty-one year-old Neal Letang became a licensed pilot this year. Letang had a lifelong ambition to fly, but says it was Collins’ mentorship and focus on safety that gave him the confidence to finally become a pilot.

“It does do something for your confidence,” he says. “You’re doing something that, for me anyway, was a little extraordinary and [Collins] helped me do it.

“At times when I was discouraged, or dissatisfied with my performance, or whatever I was doing and he’d work me through it,” he says.

As a recipient of the Order of Polaris, Collins joins the ranks of Canadian icons like WWII fighter pilot Ian Willoughby Bazalgette, and pioneering Canadian engineers Ronald John Baker and Alexander Graham Bell.

“Every student is different, every day is different, it’s all a challenge, it’s all rewarding,” Collins says. “Helping people reach that goal of flight for whatever reason they started out on, every day is its own reward. So to be awarded the Order of Polaris is a huge, thick layer of frosting on an already rich and delicious cake. I feel very humbled.”

I took this picture out the window when I was flying home last month. I love the colours together. And I love flying Air North, too (but that goes without saying).